There have been water mills on the Wey since before Norman times — there is a reference to Headley Mill in the Woolmer Forest records of 978 A.D. Although the present mill building dates from the 16th century, it represents over a thousand years of milling on the site. Early mill buildings were usually built of wood and so have not survived. Some were rebuilt in more substantial materials, such as stone or brick, the site being host to a succession of buildings, the equipment updated to take advantage of improvements in technology.
Over the centuries the power of the river has been harnessed for iron working, grain milling, paper making, and the treatment of cloth and leather. Altogether 18 known water mills operated on the southern Wey and its tributaries, although only Headley Mill remained working into the twenty-first century.
Some millers were also farmers who owned, or worked as tenants, nearby watermeadows. Elsewhere, there was potential for disputes: there is a late 19th century record from Bramshott of friction between millers and farmers over the conflicting demands for water. 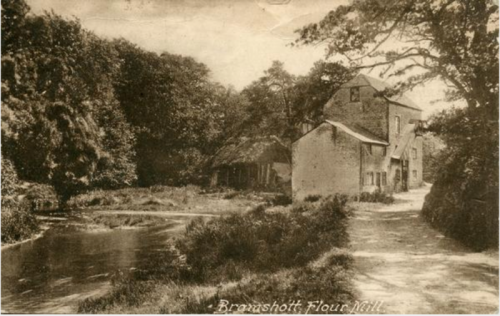 The earliest mills were corn mills — from Domesday there were possibly eight. Generally, each manor had its own mill, although Bramshott appears to have had two and Chiltley appears to have been without one, at least at the time of the Domesday Book. With the importance of bread in the diet, the local mill assumed great importance in the community. Under the feudal system each tenant was obliged to take their corn to the Lord of the Manor who owned the local mill. Early 14th century records for Bramshott reveal just how popular this system was by the number of fines imposed on rebellious tenants taking their custom elsewhere. With the decline of the manorial system, the mills passed into a variety of ownerships.
Of the 18 mills, 13 are known to have produced flour at various times. Some extended their production to animal feedstuffs such as barley meal.

The decline of the corn mills was largely due to the importation of grain from abroad. In the late 19th century it became more economic to build large steam “roller mills” at the ports. These mills were better able to supply the white flour increasingly popular from the mid 18th century. A recent reversal in this trend has been important for the continued survival of mills producing stoneground flour today.

The River Wey was on the fringes of the Wealden iron industry; the centre of activity lay to the east where useful concentrations of iron ore were easier to find. Documentary evidence is scanty but Bramshott records of the 13th and 14th centuries often refer to the “Cinder Heap”, so some small-scale “bloomery” smelting, exploiting odd pockets of suitable ore without using water power, was evidently carried on — indeed two bloomery sites have been identified. Stony Jump (Grayshott) is said to have been one source of ironstone. There seems no evidence for the use of ore from Weavers Down, which has a very low iron content. Nails, wheel rims, horseshoes and all the other standard iron products for the farm and house were produced locally.

The 16th century saw the developing iron industry rely increasingly on water to power the bellows for the furnace and for the hammers used to convert cast iron into wrought iron. Reserve supplies of water were stored in “hammer ponds”. Two of the lakes at Waggoners Wells may have served this purpose from the 1620s. The Shottermill ponds are also thought to have originated as hammer ponds. Iron was worked at a number of sites around Haslemere, at Pophole and Passfield and possibly at Barford near Churt. Cannon, shot and firebacks were now added to the list of products.
Pophole Hammer was established in 1573, first as a furnace and later as a forge, and gave its name to Hammer Bottom. Although there was a watermill on this site in 1200, it is unlikely that iron was worked here prior to 1573. Documentary evidence tells us that the site was abandoned by 1777. By this date the industry was changing over from charcoal to coal for smelting and manufacturing centres were moving to the Midlands and the North. Cannon balls and iron slag have been found both at Hammer and at Passfield (where a “hammer” was in use on the present Auriol site, from about 1585-1685).

Paper making — done by hand until the 19th century — needed a supply of water for the manufacturing process, so it was a logical step to harness the river for power as mechanisation was adopted. In the heyday of the industry there were seven Wey paper mills, all located in the upper reaches where the water supply was cleanest.
The earliest record of paper making in the area relates to Passfield in the 1690s. As demand increased, more mills were built or converted. From the 1730s Haslemere, Standford and Barford (Churt) were all centres for paper making, their peak period of production lasting from 1750 to 1850. Some mills survived longer but increasingly were no longer solely water powered. The last to close was Passfield (in 1924), which specialised in Postal Order paper, although at one time it produced all kinds. The variety of products produced by local paper mills gives some indication of the scale of production - Passfield in the late 19th century employed over sixty people.

Paper was made from rags which were cut up, washed, and pounded to a pulp, originally by water-driven hammers and later in a rotating drum. The pulp was then boiled in a vat with water and other additives, according to the paper being made. China Clay, for example was used for high quality glossy white paper. The resulting mixture was scooped up in a tray with a fine wire mesh bottom, drained, and inverted on a layer of felt. The resulting sheets were pressed, dried, and hung on ropes suspended in drying lofts whose walls were rows of shutters sited to catch the breeze. Early prints of Sickle Paper Mill show these lofts quite clearly.
The steadily increasing demand for paper products was met by an increase in mechanisation. Innovations such as the Fourdinier machine, which produced continuous rolls of paper using a rotating band of wire mesh, and the introduction of steam power, had a dramatic impact on the industry in the early 19th century. By the 1880s wood pulp had replaced rags as the prime raw material and large scale production was increasingly centred on ports with their supply of imported wood. This competition could not be met by the small country paper mill which went into gradual decline. Some mills, such as Barford, were converted to flock manufacture: waste wool or cotton was processed for stuffing furniture and mattresses.

Bramshott, Standford and Haslemere were all sites of medieval fulling mills where woven cloth was. finished. Fulling was a washing process originally carried out be treading, but later by water-powered hammers. Lengths of “homespun” cloth were sent to the mill by the weavers for fulling or “felting”. They were scoured to get rid of natural oils, then washed with soap and water, pounded with hammers in a suspension of fuller’s earth, and rinsed. Different finishes could be gained by first raising the fibres and then shearing the surface of the cloth.

Fuller’s earth was dug locally. Permission had to be obtained from the Lord of the Manor and was recorded in the court rolls — surviving 16th century licences identify sites in Churt.
Water power was also used to treat leather. This was carried out at two sites in Haslemere: Pitfold Mill and New Mill, probably jointly in the late 19th century. They obtained hides from local slaughterhouses, washed and “dressed” them, using water-driven hammers, and would have served local markets with a wide range of leather goods. Some of the Pitfold labour force, “imported” from the North of England, were instrumental in forming Shottermilll Football Club.

The manufacture of braid was carried out at Sickle Mill, near Haslemere, in the late 19th and early 20th centuries. This produced coloured trims and epaulettes for military uniforms. It would have thrived during wartime but have been hit badly by demobilisation in 1918. 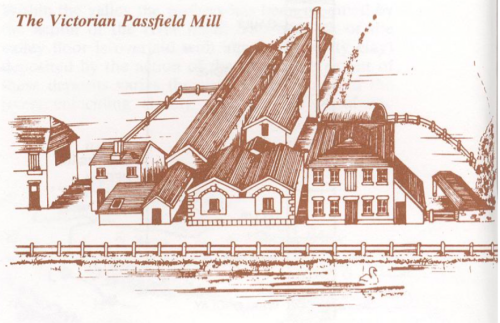 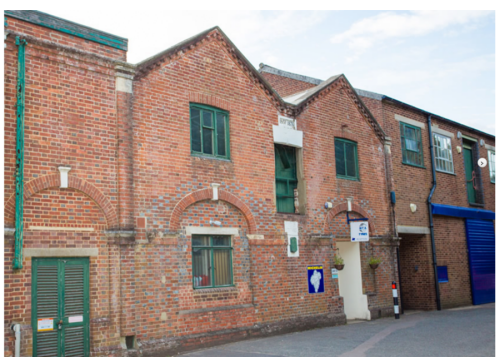 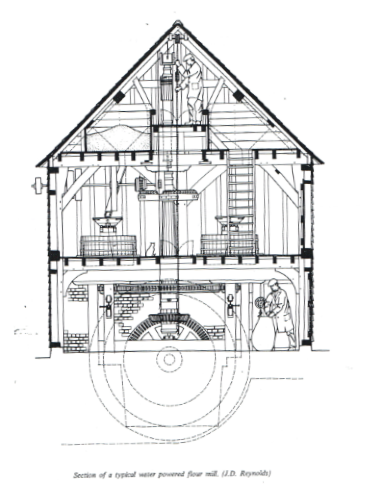