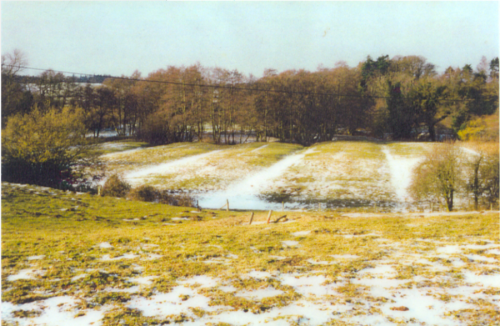 General view of a watermeadow (Mellow Farm): the remains of a winter snowfall lying in the collapsed drain channels clearly display the layout and form of the meadow.
Watermeadows have provided the major landscape and economic influence on the Southern Wey valley (and much of the tributaries as well) for the past three or four hundred years – that is, at least, until the first half of the 20th century, when most fell into disuse and many went out of any agricultural use.

The open meadow landscape of the past is giving way to scrub and woodland in many places: this loss of meadow-land enhances diversity of habitat but it is important that a significant proportion remains open grassland and – where possible – some semblance of previous irrigation practices are maintained.
Watermeadows are distinguished by their ‘ridge-and-furrow’ appearance – shaped by man – and the layouts of artificial channels and ‘controls’ that they contain (or contained) for the purposes of precisely controlled irrigation: the overall purpose being to produce two or more crops of hay each summer, and to provide early grazing for overwintered stock.
Although ‘unfarmable’ by modern methods, old watermeadows still have a key role to play in the ecology and landscape of the valley, and in the health of the river itself.

The stretch of river by Mellow Farm shows a number of features when viewed using LIDAR imaging (LIght Detection And Ranging using pulsed lasers). Oxbow forms and the distinctive ridged watermeadow are both seen in this image centred on Mellow Farm (the vertical scale is exaggerated to make the forms very distinct). Areas of lying water show as sheer areas with sharp angles, reflecting the light pulses.

Elements of a Watermeadow

The diagram shows the complex structure of an irrigated watermeadow system. For 300 years until the 1930s, this system was used to make hay with as many as three crops taken in a good year.

Features of the watermeadow system, although disused for most of the 20th century, remain along the whole length of the Wey. The stonework of sluices, hatches and stops; ridge and furrow formations in the ground, and the vestiges of carriers, can be found in fields, woodlands and even gardens.

In practice the system was more complex, the layout being tailored to the land in order to ensure even flooding and complete drainage. The meadow required careful maintenance to ensure that the lip of each carrier was level, otherwise more water would flow at the low spots. The aim was to cover the field with about an inch of flowing water, enabling the grass to continue growing during watering. 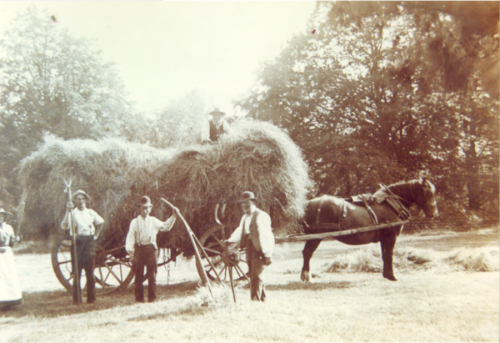 Carting hay at Bramshott in the early years of the twentieth century. 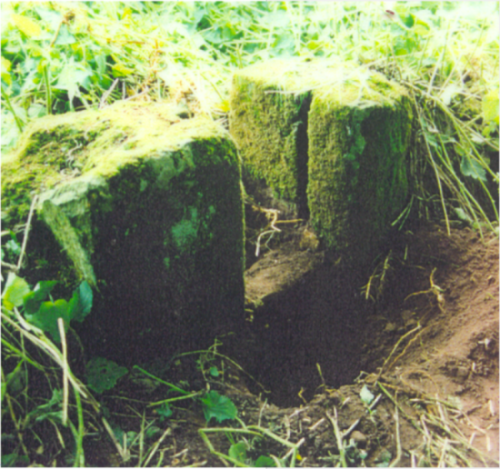 One of the small stone 'stops' used to control and direct the flow of irrigation water around the meadows.