The Southern Wey valley is situated on the western edge of the Weald, a formation stretching from the Kent coast in the east to the Hampshire chalkland in the west, and bounded to the north and south by the Downs. From the air the Weald is shaped like an elongated horseshoe. 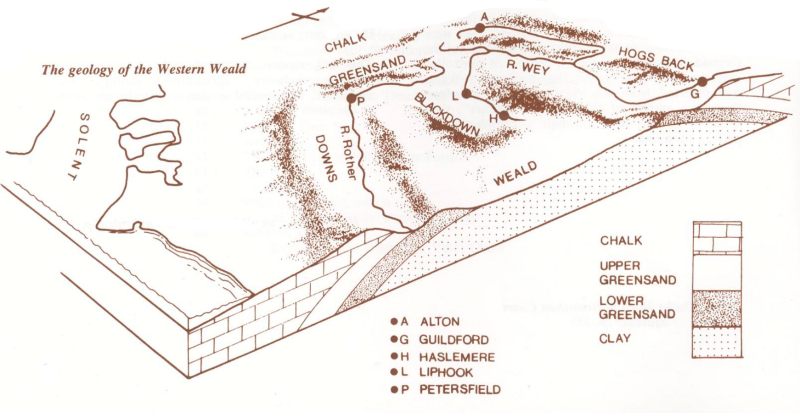 In the Cretaceous period (65-140 million years ago) the whole of this area was covered by seas which laid down layers of sediment. Under great pressure these sediments were compacted into horizontal beds of rock — sandstones, clays and chalk, depending on the nature of the sediment. Later uplifting in the middle of these beds created a dome or “anticline”. The surface layer was composed of the last beds to be deposited, the chalk. Subsequent weathering and erosion by river has removed the top of the dome, exposing the various beds of rock beneath. The hardest rocks have resisted this process best, leaving concentric ridges of high ground —- the Downs, the Greensand ridges, and the High Weald.

At the western edge of the Weald the exposed beds of the Lower Greensand are at their widest, stretching from Hindhead and Blackdown to Petersfield and Oakhanger. These are the rocks that underlie the southern Wey from its source on Blackdown to the confluence at Tilford.
The Lower Greensand comprises a series of beds. In ascending order they are the Atherfield clay, the Hythe, Bargate, Sandgate and the Folkestone beds. All except the Atherfield clay are sandstones — rocks made up of quartz and other minerals bound together by natural cement. Sandstones vary in their composition and hence in the properties of the rock and the soils they produce. The Lower Greensand gives rise to some of both the poorest and the most fertile soils in southern England.

The soils of the Hythe and Folkestone beds tend to be poor, freely draining and sandy, supporting heathers, grasses, Scots pine, bilberry, birch, bracken, and other plants that go to make up a “heath” community. Unproductive in agricultural terms, such land is important for wildlife, particularly bog plants, dragonflies and reptiles. Typical are the commons and heaths at Thursley and Frensham (Folkestone beds) and at Ludshott, Bramshott and Hindhead (Hythe beds).
In contrast the Sandgate and Bargate beds produce more fertile soils, cultivated particularly for grassland. Bargate has a relatively high lime content producing coarse brown earths. The rock contains calcareous “doggers”, the Bargate stone much favoured locally as a building material. 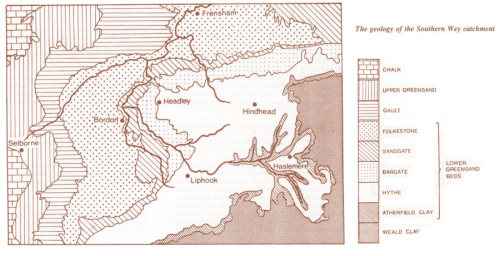 The junction of the Hythe beds and Atherfield clay is marked by a spring line. Downward movement of groundwater through the bedrock is impeded by the impervious clay so that it runs along its face until it emerges as a spring. The porous sandstones act as a reservoir regulating the flow, and as a filter clarifying the water. This is very important in determining the nature of the river. The Wey suffers relatively small fluctuations in height — an important consideration for the operation of watermeadows and mills — and only in times of heavy rainfall does it become noticeably coloured.

Within the valley the geology has been modified by the action of the river itself. The bedrock of the valley floor is overlaid with alluvium (a silty clay) deposited by the action of the river. The extent of these deposits varies throughout the course of the river, coinciding closely with the extent of the watermeadows. In places waterlogging has resulted in the formation of peat deposits — plant remains whose decomposition is inhibited by the lack of oxygen. Before the intervention of man, the vegetation of the valley would have been wet woodland dominated by alder.
River action has also been responsible for surface deposits of gravel, some of which are quite extensive, such as that which underlies Passfield Common.

The relationship between geology and industry is exemplified by the presence of clay ironstone in the Atherfield clay at Haslemere and Fernhurst which gave rise to the iron industry which has left its remains at Pophole Hammer. Similarly, rich deposits of fuller’s earth in the Lower Greensand were used in finishing woven cloth. There were water-powered fulling mills at Liphook (in the 15th century), Standford and near Haslemere. Fuller’s Vale at Headley must have been a centre at one time.