The River Wey is quite unusual in that it has two sources, one in West Sussex and one in Hampshire. The two individual streams develop very quickly into fully fledged rivers both called the Wey but identified individually as the North Branch, flowing from Alton in Hampshire, and the South Branch running from Blackdown just over the West Sussex border near Haslemere.
The southern branch of the River Wey rises in the hills that surround Haslemere. For fifteen miles it flows first westwards, then north in an arc through Hampshire to re-enter Surrey near Frensham. It is joined by the Alton branch of the Wey at Tilford - the point which is the downstream limit of the River Wey Trust's 'area of interest'.
From Tilford the Wey goes on via Godalming and Guildford to join the Thames at Weybridge, and thence to the sea.

In its upper reaches the souther Wey is a small river flowing though a predominantly rural landscape of woods, fields, and gardens. The quiet nature of the valley today belies its history as the scene of intensive industrial and agricultural activity, much of whose legacy is still with us.
The six miles of river between Haslemere and Headley supported over a dozen watermills, of which one was until only recently (into the 21st century) still a working mill.

Less obvious are the watermeadows which once ran almost uninterrupted from the source of the Wey downstream at least as far as Frensham. They were devised to improve the fertility and drainage of the riverside meadows through a process of controlled irrigation, and so to maximise the production of hay. Water was diverted from the river onto the meadows through a system of channels or 'carriers', then returned to the river through a complimentary pattern of drains.
The Wey meadows are known to have been in existence in 1680, and continued in use until the early 20th century when changes in agricultural practices made them uneconomic.
Watermeadows are found elsewhere in the country, with the most celebrated in the valleys of the chalk streams farther west in Hampshire and Wiltshire, but the Wey system differs in underlying geology, in scale, and in the complexity of the arrangement of sluices, hatches, and particularly aqueducts.

For a modest river, the Wey powered an impressive number of watermills - the six miles of River between Haslemere and Headley, for example, supported in its heyday over a dozen mills. Tributaries also powered mills – for instance Kingsley Mill on the Slea system, or the three mills at Barford on the Whitmore Vale stream.
The survivors include Sicklemill (Haslemere), Pophole Mill (Hammer - the impressive sluices of an Elizabethan iron mill) and Headley Mill (a working cornmill since before Domesday).

The highly engineered system of watermeadows was initiated in the seventeenth century, with the aim of vastly improving agricultural output: it was subsequently refined by the introduction of the unique aqueducts.
Details of these landmarks - many of which can be seen from public rights of way - can be found in the Trust’s Guidebook.
Key sites are also progressively being covered in the Trust’s series of interpretive leaflets.

In many places the River Valley provides a nature reserve of importance and diversity. Where watermeadows have been lost, new habitats and ecosystems have emerged and part of the Trust's work is to strike a balance between the various environments, the conservation of archaeological and historical features, and access by the public, as well as to help resolve the conflicts presented by contemporary agricultural and commercial uses.
The Trust now owns and manages two sites - one an area of former watermeadow at Bramshott, the other a small area of alder-carr on the Hollywater Stream at Griggs Green. 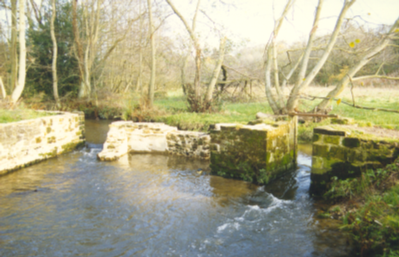 Water quality and river flow are intimately related: whilst the Trust is always concerned as to quality within the catchment, happily, the Southern Wey has good and reliable flows throughout the year and crises in water quality are therefore generally limited to ‘accidental’ discharges into the River, rather than routine problems.
However the river is still only rated as 'poor' to 'moderate' by the Rivers Trust. We are engaging in further monitoring of the quality to allow a better view of the areas at risk and causing issues.