Radford Park opened in 1983: it was formed from a combination of the landfill site from land left over from a housing development together with - as a later addition - from former grazing land. Its transformation from dereliction to country park was in large part due to the dedication and leadership of one man, a parish councillor, the late Archie Derry. 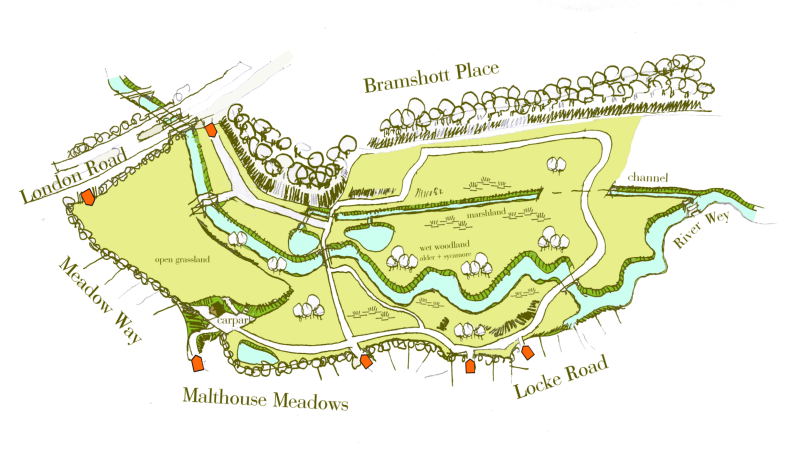 Radford Park takes its name from Rat-ford (Red-ford), where the old London Road crosses the Southern Wey: the Park follows both sides of the river-valley upstream for about half-a-mile.

From the early 1600s, most of valley of the Wey was occupied by a uniquely complex system of watermeadows, remains of which are still visible in the Park; the Hooke family, local ironmasters who built their Tudor mansion at nearby Bramshott Place, were instrumental in establishing these watermeadows.
Watermeadows offered a system of drainage and irrigation (and fertilisation) of potentially highly-productive land, where late-winter grazing and multiple summer hay-crops helped to kick-start an agricultural revolution. The system continued working into the 20th century when the manpower losses of the First World War and the increasing mechanisation of British agriculture and introduction of artificial fertilizer made them uneconomic.

The smaller map reconstructs the layout of the Radford watermeadows: it shows how water was taken out of the river at sluices; distributed, exploiting the fall of the river ad contours of the valley by a hierarchy of manmade channels (“carriers”) onto the meadow grassland using stone controls (“hatches”) to direct the water, and then drained quickly away back into the river.

The route of the river through the section of the Park nearest to the London Road was changed in the 1960s when the landfill took place: significant parts of the watermeadow layout were lost then, although visible fragments remain on the north (Bramshott Place) side as well as further upstream beyond the landfill.

Today, the Park also offers circular routes for walkers, wildlife ponds and managed woodland: the dominant tree of the wetter areas is the alder – this is managed by ‘coppicing’, where individual trees are cut down (on perhaps a 15-year cycle, sometimes longer) and new stems regrow from the coppiced stools, some of which are 100 years old or more; this environment also provides a habitat for wildlife (invertebrates and insects, water creatures and amphibians, small mammals and birds), and plants ranging from ones that grow in water to those preferring our usual local poor sandy soil. 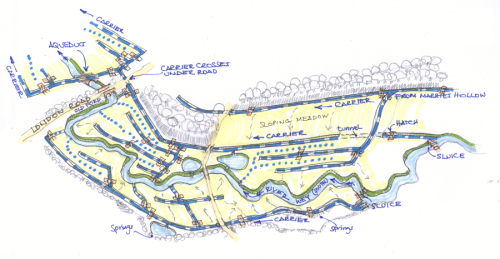 The smaller map reconstructs the layout of the Radford watermeadows: it shows how water was taken out of the river at sluices; distributed, exploiting the fall of the river ad contours of the valley by a hierarchy of manmade channels (“carriers”) onto the meadow grassland using stone controls (“hatches”) to direct the water, and then drained quickly away back into the river.

The aqueduct, a Scheduled Ancient Monument , was an important feature of the watermeadow system mentioned in the 1690 agreement. It continued to function into this century, bringing water from the right bank, over the river to water the meadow on the left bank. The carrier on the left bank seems to have been blocked when the Portsmouth road (A3) was raised (the road was turnpiked for coach traffic c. 1750) but there was already an “arch” according to the 1690 agreement. By the 1970s the Aqueduct was badly cracked and in imminent danger of collapse. Restoration by the Bramshott and Liphook Preservation Society, (grant aided by HCC, EHDC, and DoE) sparked local interest and led to the formation of the River Wey Trust. 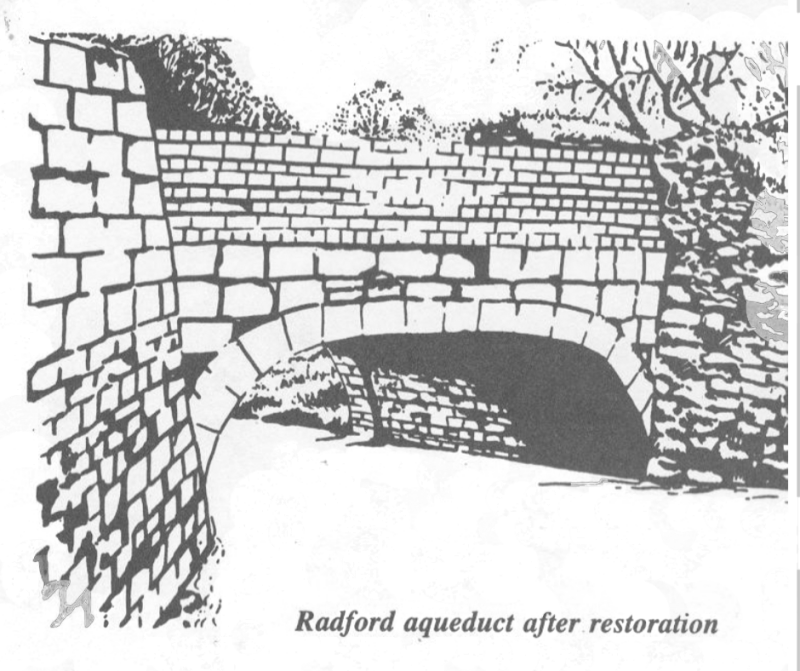 From the aqueduct the carrier continued on the left bank downstream, supplying water to Radford and Tunbridge Meadows. Radford Meadow was most recently the site of an abattoir, the foundations of which remain, disrupting the carrier for some distance. Nevertheless there are excellent ridge and furrow remains and a good wetland flora including the Common sedge (Carex nigra). Willow scrub is encroaching.
This area is now largely covered by the Liphook Bypass which was opened in July 1992.